Do you know how to identify pure camphor? If not then let’s learn from the beginning. Camphor or Kapoor is very prominent in Indian culture and several Southeast Asian countries. The medicinal significance is undeniable besides the religious sentiments associated with this herb. In fact, the beauty industry is still employing Camphor to create a mesmerizing essence in essential oils and beauty products. However, several Camphor manufacturers in Maharashtra are selling synthetic Camphor instead of natural ones that produce a sense of smell relatively less strong than the naturally obtained Camphor.

For ages, this magical herb-like substance has changed the face of science and religion by offering so many benefits ranging from being used during religious worship to curing dandruff in hairs. The effectiveness is beyond imagination. But we can distinguish between a synthetic and natural Kapoor Tablet. While camphor itself is endorsed as a sign of purity, how can you possibly think of buying a synthetic Kapoor that does not have to offer benefits similar to the original one?

If you scout through the internet, you will only find sources speaking about the Bhimseni Kapoor, the most pious form of camphor available in the market. Only a handful of camphor manufacturers in Mumbai sell an authentic quality Kapoor. The thing with retailing a product is; we want to neglect the quality, and the biggest reason behind this is an unwary attitude. Find out any 5 useful benefits and uses of Camphor or Kapoor, and you would see most of them talk about Bhimseni Kapoor.

Further in this article, we will help you seek answers on the science behind the purity and ancient significance of Camphor and how you can find out the natural and real camphor online.

The Science and Significance Behind Camphor/Kapoor 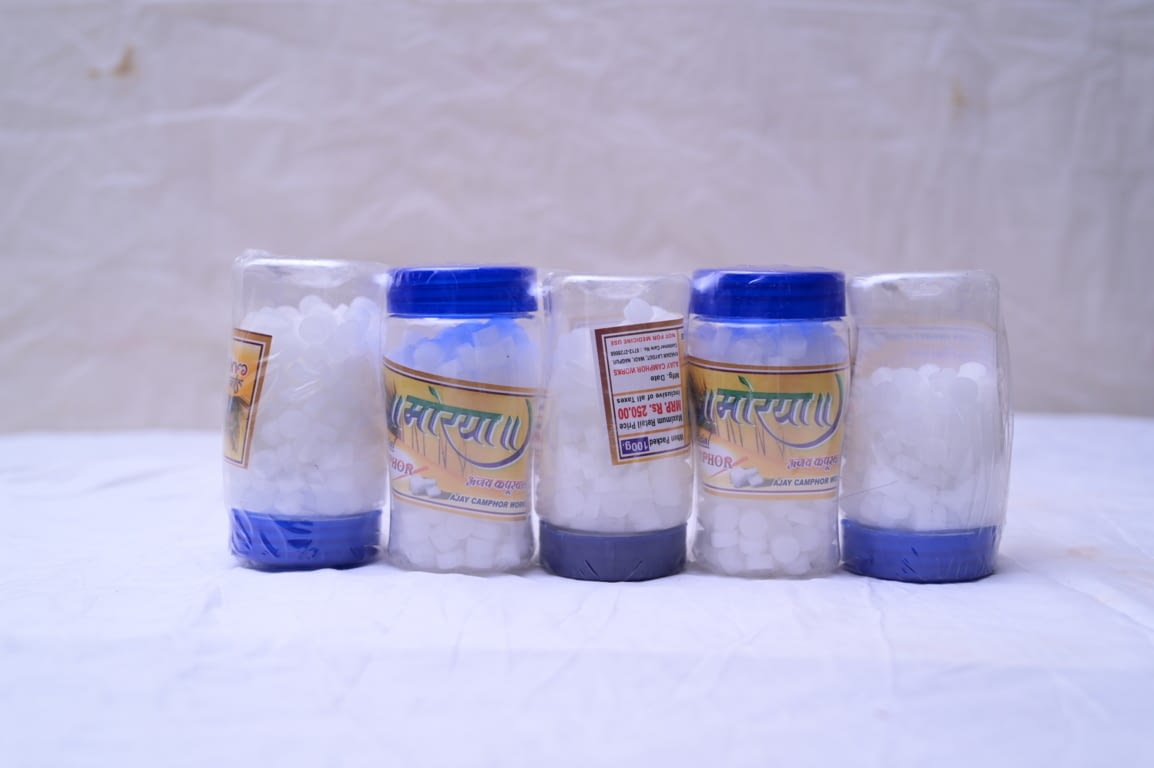 Ayurveda highly regards camphor due to its tranquil fragrance and spiritual significance. While everything has turned into a mere commodity now, it does not make a real and natural camphor any less sanctimonious for religious rituals performed at every Hindu household. Ayurveda describes natural camphor in pure Hindi as ‘Kachha Kapoor.’

The prime reason a Kapoor is burnt during any pious and religious ceremony is its ability to create a space of peace, calmness, and union with God. It cleanses the body’s chakra and facilitates inner stability. The calming nature of Camphor makes it an excellent element to be added in ointments that act as cooling agents when the skin suffers from a burning sensation.

While we Indians treat camphor as the most crucial part of any festivity and morning aarti, other countries have used it to cure physical ailments. However, it all comes back to Ayurveda, which has offered humankind solutions that make life much easier. Some of the camphor manufacturers in Maharashtra produce Bhimseni Kapoor, which is obtained from the tree leaves and branches. Ayurvedic literature refers to this as the only pure form of camphor since the most ancient Ayurvedic period (between 8th -10th AD).

While buying Camphor for your religious or medicinal use, it is pretty hard to segregate the Pakva camphor from the Apakva. Let’s look into some classifications that would help you identify the purest form of Bhimseni or Pakva Kapoor.

Every natural substance has a specific shape, form, color, and smell, separating it from its synthetic counterparts. Amidst the longline of Camphor manufacturers in Nagpur, if you do not want to get deceived by one particular manufacturer, learn to make a difference with the help of these classifying aspects:

A Pakva or Bhimseni camphor would be precisely white in appearance. You can easily separate it from the synthetic or a pakva Kapoor, which looks yellowish or a little brown. One substance known as Safrole is in high quantity in yellowish or brown-looking camphor.

If you choose to utilize the safrole-rich camphor in your hope for whatsoever need, be ready to phase physical ailments like breathing issues, fluctuating blood pressure levels, dizziness, nausea, etc. So the next time you come across any camphor manufacturers in Nagpur, make sure you select only the white variant from the.

Have you smelled Vicks, a vapor rub utilized while a person suffers from cold n flu? A synthetic or Apakva Kapoor smells similar to it. Yes, Kapoor does have a very distinct and strong smell; however, it is also smooth at the same time. It is probably adulterated if you find it hard to breathe or an itching sensation in your nose while sniffing camphor.

One of the many significant factors associated with a Pakva or Bhimseni Kapoor is its shape. Do you know that a Bhimseni Kapoor, derived from the Cinnamomum Camphora or Kapoor tree, is not derived in any specific form? It comes in a powdered format, but the manufacturers sell them by modifying its shape into small cube-like structures. You can also find the powdered substances of the camphor online.

To find whether the camphor is pure or synthetic, you need to know that:

The Uses of Camphor

There are myriad uses of Camphor. Let’s look at some of them:

The next time you go to buy camphor, just remember that there are many adulterated varieties available in the market and it could be the reason behind several health problems. Choose your manufacturer wisely and remember all the above differentiating factors to select the best Camphor or Kapoor for your plethora of uses.